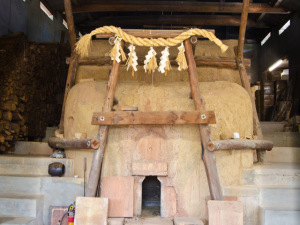 After the abolition of feudal system of domains and the revision of the country into prefectures in 1871, a number of pottery ateliers making Kishu ware were forced to close after losing financial support from the Kishu Domain. In 1937 Mr. Yorisada Tokugawa (the former lord of the Kishu Domain), who was deeply concerned about this situation, entrusted Seiho with the task of reviving Kishu ware. From that time Seiho determined to dedicate his life to this task and was given the name of ”Aoi-Gama” for his atelier by Mr. Tokugawa. 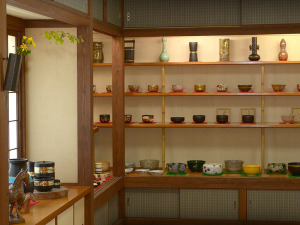 Nachiguro-Yu is a black-colored glaze made from natural black stones named “Nachiguro”. Its light mat black color is one of its special features, and its rough surface is easy to hole in the hand. The longer it is used, the more elegant it looks. Nachiguro-Yu has been highly esteemed by many heads of tea ceremony school (“iemoto”) and is widely popular.

The name “Nachiguro” relates to the black (kuro / guro) stones of the Nachi area. According to the old literatures, the black stones used to be mined at the Nachi area in Wakayama prefecture, although the stones are currently mined at Kumano city in Mie prefecture.